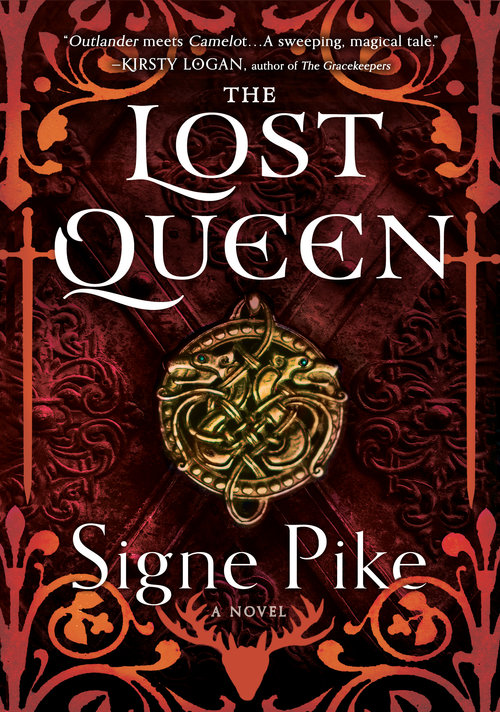 Link for news about a television show based on this book: Deadline news.

Her memoir Faery Tale: One Woman’s Search for Enchantment in a Modern World, was a “Best of 2010” Pick from Kirkus Reviews and received glowing reviews from Harper’s Bazaar, Women’s Adventure Magazine, and renowned spiritual leader Marianne Williamson among others. Pike has been featured on WPR’s “To the Best of Our Knowledge” in an episode on enchantment along with Salman Rushdie, Neil Gaiman, and A.S. Byatt.

She was born in Ithaca, New York and currently lives in Charleston, South Carolina.

Summary:
AD 550. Land of the Britons. Strathclyde, Scotland.
Languoreth, and her twin brother, Lailoken, are the children of a king. Their mother died. Their nursemaid is Crowan. Languoreth is strong-willed and independent. She wants to become a Wisdom Healer like her mother had been. Instead, she will someday marry a man of her father’s choosing and become a queen. Lailoken has a gift of reading signs from the gods. Languoreth can read Lailoken’s thoughts. They are handsome children. They have a close bond. When the story begins, Languoreth, and Lailoken are children destined for greatness.
The timeline of the story is AD 550 to 572.

My Thoughts:
Medieval history is one of my favorite periods to read about. I love historical fiction. These two combined loves led me to read this book.
I have several thoughts:
•The Lost Queen has been compared to the Outlander series and Camelot. I disagree. Outlander is a different period in Scottish history and time travel is involved. Camelot is a larger than life story. It’s a famous story. A story with a bit of magic, and a lot of romance. I’ve not read The Mists of Avalon series (so I cannot compare.)
•Languoreth is the narrator or voice in the story. Her brother is a strong character, but it is her thoughts and words that is prominent.
•For most of The Lost Queen, it felt more like a young adult novel. Until the last quarter of the story, the main characters are young people who are headstrong and valiant. Plus, the story lacked a maturity (probably because of the ages of the twins.)
•Languoreth is in love with a young man whom she’s spent only a brief time with. For me, chemistry and lust is something you feel immediate. Love takes time to grow. Also, love over the years takes dips and turns, it develops roots, and it may or may not look anything like the love that was there at the start.
•The Lost Queen showed the practice and culture of people living in this time period. I enjoyed reading about the medicinal arts and mysticism.
•Despite how Languoreth feels, and despite her strong-willed nature, she obeys her father in marrying another man. I love characters who do the right thing despite how they “feel.” Feelings often lead people astray. Of course, I’m in my mid 50’s and I’m reflecting back on those feelings that led me astray. Doing the right thing requires courage, humility, and sacrifice. This gave Languoreth a maturity in the story. This was a sign she had blossomed and developed.
•The romantic element is strong but brief. Brief in that most of the romance is in her mind and heart. She remembered their stolen moments and wonders how he truly feels? She wondered if it was something of lasting value?
•The Lost Queen covers at least half the life of Languoreth. I can’t imagine what a second novel will reveal? Possibly it will be the story of Lailoken. He is the basis for Myrddin or Merlin.
•I was not swept away in The Lost Queen; however, I was entertained. I recommend this novel and I’m enticed enough to read its sequel.